Virginia “Ginni” Rometty has agreed to step down at IBM, and it’s without a doubt the best thing she has done for the company in her 8+ year tenure as its CEO.

The news sent the markets reeling and IBM stock soaring; up 5%.  The market clearly agrees that this is a long overdue and much needed move.  Ginni plans to step down as CEO in early April and retire officially by the end of the year with nearly 40 years of experience at IBM.

NET(net) has been somewhat critical (but fair) of Ginni over the years.

We thought now it appropriate to put Ginni’s reign into focus with a fourth blog in the NET(net) series related to her tenure.

Immediately we look at IBM’s value under her leadership to highlight the decay that was the Ginni-era.  Since Ginni became CEO, IBM’s value is down nearly 50% from a market cap of roughly $240 Billion down to roughly $120 Billion in just 8 years.  I know of no other person, company, or group that had a more detrimental impact on the value of IBM than Ginni did; costing the company $15 Billion per year in real value (before even considering her lavish compensation package).

Our team was deliberate in its approach to help NET(net) clients reduce the costs of their IBM investments (helping just one client reduce costs by more than $500 million), but even our collective best efforts add up to a tiny fraction of Ginni’s calamitous mismanagement.  All the while, she was attempting to financially engineer the company to perform in certain ways, attempting to improve the stock performance and meet her EPS ambitions. However, this too was a complete catastrophe as IBM stock went down 26% while the S&P 500 is up 160% during that same time period, while Ginni was CEO (See Below). 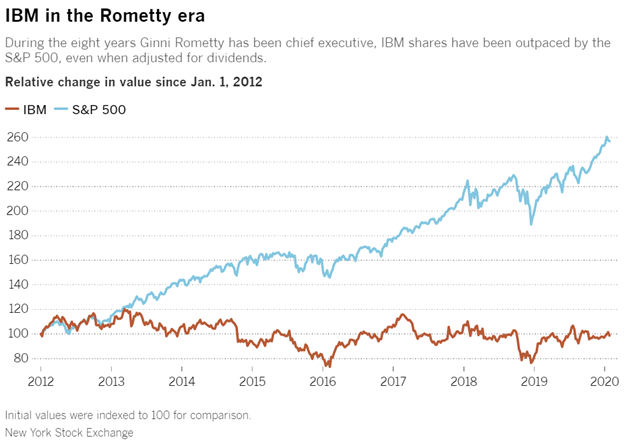 Even if we consider the most favorable case for Ginni by taking into consideration the stock dividends, IBM was a little bit worse than dead money for her entire reign.  If this performance is viewed as anything but an unmitigated disaster, it’s clear other motives are emanating from the people or groups trying to peddle this nonsense.

For example, Apple CEO Tim Cook praised Ginni as “a trailblazer – a keen leader and innovator”.    What trail was she blazing when IBM revenues declined for 22 consecutive quarters?  This probably has nothing to do with the fact that Apple is an IBM Partner now, does it?  Other motives indeed.

It seems more likely the reasons Ginni wasn’t summarily fired and dismissed unceremoniously years ago were for political or other reasons. These were likely too difficult for IBM’s board to contemplate or implement, especially considering she was its first female CEO and they were perhaps loathe to reap more bad PR.  Meanwhile, IBM customers languished in purgatory, suffering from a company that turned from mystics (i.e. promises of ground-breaking products and thought leadership) to tyrants (i.e. monopolistic attitudes confrontational account management and litigious tendencies), paralyzed by IBM’s incomprehensible strategy that resulted in exactly NO new market leading products or services during her entire reign.  Note: some claim Artificial Intelligence (AI), but we say no. First of all, Watson was made generally available in 2010 (2 years before Ginni became CEO), and second, Watson has failed miserably to even reach the early majority markets, much less to prove a consistent and repeatable business case to any customer except for a very few ‘reference accounts’ where IBM has massively over-subsidized the technology with an army of consultants to gin up the algorithms with human IP.  Watson has flatly never lived up to the hype.

I can already hear some of you, “But what about Blockchain?”

Also, a failure.  Hyperledger Fabric, the technology that IBM is calling and even selling as a permissioned “Blockchain”, isn’t even a real blockchain. IBM has stripped out most of the major functionality of a true blockchain to make it ‘suitable’ for customers.  Also, the architecture is wonky, way too complex, and too difficult to use according to our clients.  Further, critical features such as scalability and performance have been sacrificed.   Some of our clients who have performed deep analysis on the early version of Hyperledger (such as Ethereum and others) have characterized the technology as immature and inadequate for enterprise use.

Ginni tried to make IBM leaner, by divesting unprofitable business units -- and she tried to help the company innovate and amp up profitability by betting big on AI (Watson), but this approach failed.  She also had very ambitious plans for cloud computing but SoftLayer couldn’t keep pace with Amazon (AWS), Google (GCE), and Microsoft (Azure) among others.

But what about Cloud. you say?

Isn’t IBM a market leader in Cloud?  Well, to her credit, Ginni did acquire SoftLayer in June of 2013 for $2 Billion, but at the time of the acquisition SoftLayer was described as “the biggest privately held cloud infrastructure provider (IaaS) in the world”.  It had a unique competitive differentiation in the market, which let customers pick dedicated and specialized hardware at an attractive price-point, something you couldn’t do in Amazon AWS.  The value proposition with SoftLayer was scale.  You could get big bulky servers with tons of processing power, memory, and storage for a low cost in comparison to Amazon and Google, which had low caps on memory and didn’t have fast (local) storage.  For a while, SoftLayer was attractive for particular use cases – so what happened?  Well, Amazon and Google caught up and IBM went to sleep.  Both Amazon and Google came out with high memory instances with faster storage and ate IBM’s lunch.  So no, IBM is not a market leader in Cloud.

But what about Red Hat?

For sure, her biggest decision was the acquisition of Red Hat, but IBM’s new CEO Arvind Krishna is largely credited as being not only the idea man, but also the deal architect behind that one. That may be the ONLY thing that saves Ginni from going down as the worst tech CEO ever.  However, should IBM fail to become the de facto market leader in hybrid cloud, she will still be in the running with some stiff competition out there for the worst tech CEO Title: Leo Apotheker, Carly Fiorina, Sanjay Kumar, and the late Bernie Ebbers to name a few.

To be totally fair, a lot of IBM’s big problems predate Ginni taking over as CEO.  When Sam Palmisano was CEO, the company artificially inflated its EPS targets through stock buybacks, primarily achieved from cutting costs by walking out incredibly talented (and highly paid) folks in the U.S. and replacing them with offshore workers, particularly from India.  This IP drain in the company had very severe and detrimental long-term effects on the company, but Ginni did nothing to change this.  That was her amazing opportunity to transform IBM.

Regardless, this Red Hat moonshot for IBM better work, because they paid a 131x multiple on Red Hat annual profit to acquire it for $34 billion USD.  Some critics call it the worst deal ever.  I’m not ready to say that just yet, but it all depends on whether IBM can transform into THE true hybrid cloud market leader. But even if they do, that’s going to be Krishna’s accomplishment, not Ginni’s.

Since the Red Hat deal, IBM has reported five consecutive quarters of negative growth, but did barely eke out a small gain in Q4 2019.  Ginni would undoubtedly like you to see that as IBM turning the corner on this acquisition, which means her job is done.

In the end, I believe Ginni will be remembered for three things:

For a graphical understanding of this, see the chart below: 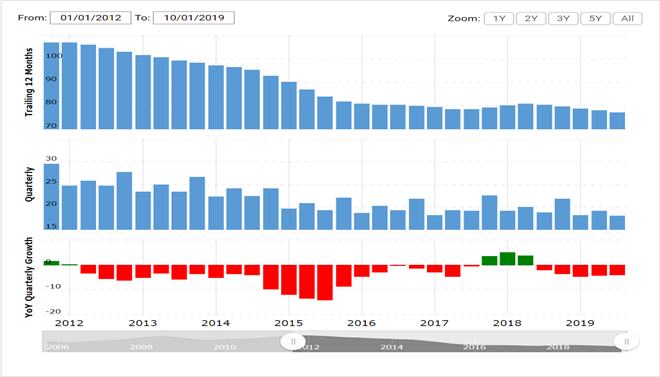 Let us know what you think of Ginni Rometty’s tenure at IBM!

Since 2002, NET(net) is the world’s leading IT Investment Optimization firm, helping clients find, get and keep more economic and strategic value. With over 2,500 clients around the world in nearly all industries and geographies, and with the experience of over 25,000 field engagements with over 250 technology suppliers in XaaS, Cloud, Hardware, Software, Services, Healthcare, Outsourcing, Infrastructure, Telecommunications, and other areas of IT spend, resulting in incremental client captured value in excess of $250 billion.

NET(net) has the expertise you need, the experience you want, and the performance you demand. Contact us today at info@netnetweb.com, visit us online at www.netnetweb.com, or call us at +1-866-2-NET-net to see if we can help you capture more value in your IT investments, agreements, and relationships.

Time to Defuse Your Kyndryl Deal BEFORE it Detonates

Top 5 Reasons Why The Mainframe Empire will Strike Back in ...