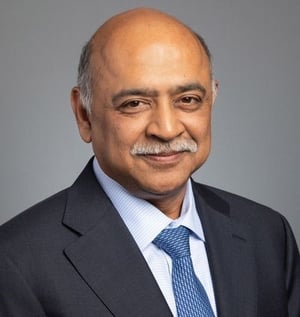 Leave it to IBM to bring in fresh new blood.  After nearly 40 years at IBM.  Ginni Rometty steps down and Arvind steps forward; someone with only 30 years in at IBM, so we can expect a radical departure from the past, right?  Jokes!!  Of course, we are jesting, but maybe (just maybe) this guy is different. Let’s see.

IBM’s new CEO (who currently heads up IBM’s Cloud and Cognitive Division), is credited with being the primary architect of IBM’s acquisition of Red Hat.  Certainly, he will be measured by how well IBM becomes more like Red Hat, rather than Red Hat becoming at all like IBM.  If Arvind is to be successful, IBM will need to become the de facto industry standard solution for Hybrid Cloud (if not a whole lot more), as this is his fundamental vision.  Arvind is credited with changing the cloud game at IBM. Instead of competing IBM SoftLayer (IBM’s Cloud Solution) against the likes of Amazon AWS, Google GCE, and Microsoft Azure directly, by shifting strategy to instead ‘play nice’ and allow IBM customers to use IBM for private, public, or even hybrid cloud services, while connecting and integrating with public cloud options like the solutions mentioned above.

Critics of the Red Hat acquisition say that IBM’s purchase price of $34 Billion (131x multiple of annualized profitability) was an insane amount to pay, especially for a company that basically provides maintenance and support services for ‘free’ software. When you consider IBM’s history and track record of pretty much destroying every company they have ever acquired or at least ruining the things that made every acquisition unique, it’s doubly alarming.  To look at IBM’s acquisition history is to remember some really great companies that were completely gutted by IBM.

Just their multi-billion-dollar acquisitions (where terms were disclosed) over the last 10 years (prior to Red Hat) are a ‘who’s who’ of who isn’t here anymore.  Remember the following companies?

SoftLayer is an interesting case study.  At the time of the acquisition by IBM in June of 2013, SoftLayer was described as “the biggest privately held cloud infrastructure provider (IaaS) in the world”.  It had a unique competitive differentiation in the market wherein they let customers pick dedicated and specialized hardware at an attractive price-point, which was something you couldn’t do in Amazon AWS.  The added value proposition with SoftLayer was scale.  You could get big bulky servers with tons of processing power, memory, and storage for a low cost in comparison to Amazon and Google, which had low caps on memory and didn’t have fast (local) storage.  For a while, SoftLayer was attractive for specific use cases – so what happened?  Well, Amazon and Google caught up and IBM was asleep at the wheel.  Both Amazon and Google came out with high memory instances with faster storage and ate IBM’s lunch.

What happened next? What is IBM’s strategy right now?  Seriously.  Go to their website and summarize what their strategy is.  In all seriousness, I would be very interested to know because our clients have absolutely no idea.  What they do know however, is that IBM remains one of the most tyrannical companies on the face of the planet that:

So, what is their strategy?

IBM says you need AI, Cloud, and Blockchain….to get what?  What’s their platitude?  Quantum Computing?  Whatever the heck that is?!

Regardless of their newest slogan or tagline, they’ve been telling us all this propaganda for a long time already and yet nothing has really changed:


Arvind’s challenge is to first clarify, and then get you to believe in IBM’s vision again.  For that, he’ll need to leverage his technical background and regain organizational credibility.  For so many years IBM has been selling futures with excellent marketing and slick sales ‘consultants’, but NONE of their slogans have lived up to the hype; Watson (AI), Cloud, and Blockchain chief among them In summary, if more ‘hype’ and marketing is their strategic vision, I am worried about their long-term viability.

Further ‘clouding’ the future, we turn to the acquisition of Red Hat, and are left with the question of exactly what have they pivoted to? Hybrid Cloud?  IBM now wants to be the cloud management layer and will use tools like Watson to give you critical insights on how to minimize cost and risk, and maximize the realization of value and benefit from all providers?  I don’t know because their vision has not been clearly articulated to my clients despite them asking for it for years and years.  If that is IBM’s vision, how exactly are they going to do it?  What is the technology that gives them this ability, and why can I only get it from IBM?  That is Arvind’s lofty charge.

Arvind, you have many challenges ahead of you and we wish you all the best!  Our clients could really benefit if IBM became great again, so we are hopeful you will announce a new vision for IBM products and services that:

Our clients benefit with a strong IBM in their corner, helping to deliver high value, low cost solutions that result in an improved business. We would welcome IBM back to the table if these were the attributes it envisions and embodies for the future.

Since 2002, NET(net) is the world’s leading IT Investment Optimization firm, helping clients find, get and keep more economic and strategic value. With over 2,500 clients around the world in nearly all industries and geographies, and with the experience of over 25,000 field engagements with over 250 technology suppliers in XaaS, Cloud, Hardware, Software, Services, Healthcare, Outsourcing, Infrastructure, Telecommunications, and other areas of IT spend, resulting in incremental client captured value in excess of $250 billion.

NET(net) has the expertise you need, the experience you want, and the performance you demand. Contact us today at info@netnetweb.com, visit us online at www.netnetweb.com, or call us at +1-866-2-NET-net to see if we can help you capture more value in your IT investments, agreements, and relationships.

Time to Defuse Your Kyndryl Deal BEFORE it Detonates